Three years after its debut, Among Us is coming to the Playstation 4 and Playstation 5 consoles. What do you need to know about it?

InnerSloth has officially confirmed that Among will appear on Sony consoles. A few details were shared, but the most important information was omitted. This is not the first time developers have made an announcement of something important without revealing everything.

Now we learn, among other things, that the crossplay function will actually be available. We can of course also expect a multiplayer. In addition, special items from Ratchet & Clank are waiting for players.

Among Us on the Playstation

In addition to the Twitter post, a full trailer was also added. Thanks to it, we know what additional cosmetic items should look like. Of course, this is not what interests players the most. 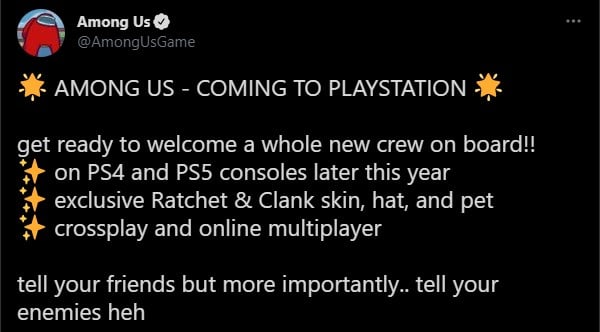 Unfortunately, the most important information was not published, namely:

One can only expect that Among on Playstation will be released this year because the words “2021” appear on the shared video. InnerSloth is hardly associated with the incredible pace of work, but who knows, maybe this time the studio will surprise everyone.

The price can be as much as for a PC, which is around $ 5. It is doubtful that the title will be made available for free.

Until then, we have to wait for more information, especially regarding the date and price. Certainly, however, the release of the game on consoles may encourage more players to this title.