Battlefield 6 and FIFA 22 are one of the most anticipated productions.

Developers of Electronic Arts revealed when they intend to release Battlefield 6 and FIFA 22. Both games are quite expected by the gaming community, so this information may be of interest to a lot of people.

At the moment, there aren’t many details about both productions, but these are likely to be released in the coming months or even weeks.

When will each of EA productions be released?

According to the developers’ information, Battlefield 6 will be released in the third quarter of 2021. However, it is worth remembering that Electronic Arts uses a fiscal calendar, so it is a period between October and December. Such productions as Madden 22, F1 2021 or FIFA 22 are to appear in the second quarter, i.e. between July and September.

Another title to be released in the fourth quarter of the fiscal year is the EA Sports PGA Tour. This one is expected to appear between January and March 2022. 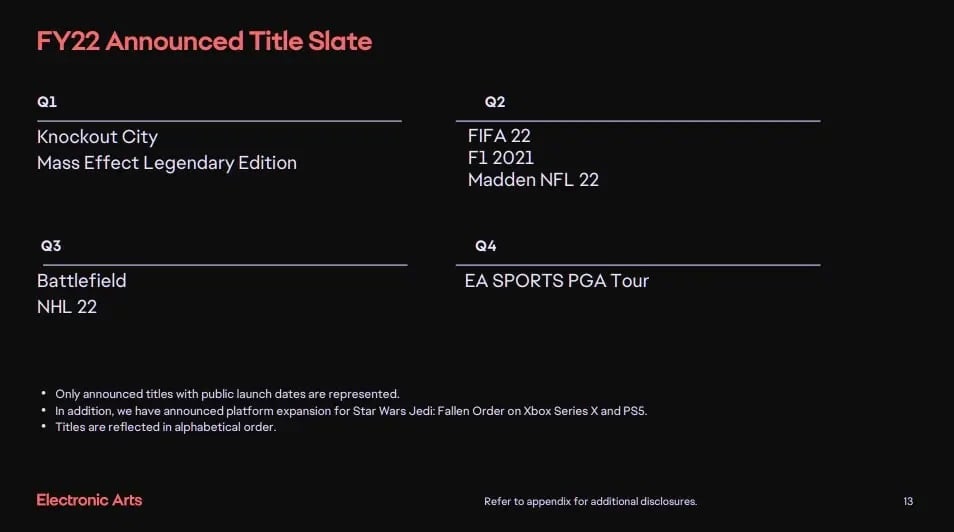 Aside from the information in the slide above, there was no more valuable information on games from EA. FIFA 22 fans may be more satisfied, as it will appear much earlier than the new Battlefield.