Supercell has made the decision to change the release date of the next Brawler.

Squeak evokes a lot of emotions, not only because it will be another brawler, but it is already known that he is to be really strong. So far, all information has said that the character will appear on May 22, 2021.

It turns out that this will not be the case. However, there are a few things to consider here – most notably time zones. Why are leakers and YouTubers talking about a slightly different date than Supercell?

READ MORE
We already know what the upcoming skin for Nita from Brawl Stars will look like. Competition winner

When is Squeak coming out?

Several hours ago, Frank replied to one of the players that Squeak would appear on May 21, not on May 22, as previously communicated. However, what is puzzling, “Game Lead” added: 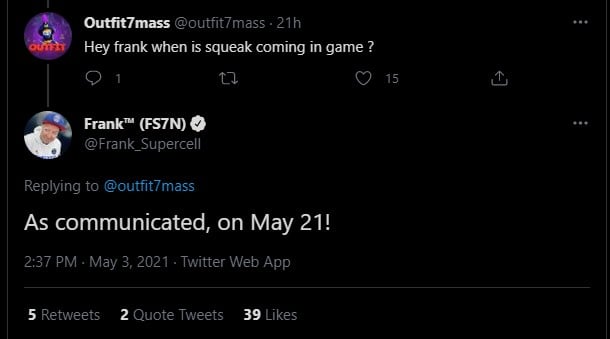 Except that the communication from the beginning was that Squeak will be released on May 22nd. So the question is when to actually expect him. May 21 is Friday, the 22nd is Saturday. So it’s possible that Supercell will indeed release the next Brawler at the end of the week, not over the weekend. Of course, it all depends on the time zones, for some it may still be May 21, for others 22. You definitely need to be vigilant on both these days.