Supercell quietly announced a rework of one of the game modes via Frank’s account.

Supercell relatively often foretells some news not so much through its official accounts, but, for example, through people working at Supercell. It is exactly the same this time.

Frank, “Game Lead” of Brawl Stars, responded to players’ complaints about the Gem Grab mode. As we read, the appearance of gems is too random, as a result of which the team with the advantage is sometimes unable to use it.

READ MORE
How will the next Brawl Talk be different from the previous ones? A change awaits Brawl Stars

One pro-gamer has tweeted that there is too much randomness about the spawning of gems in Gem Grab. As we read: 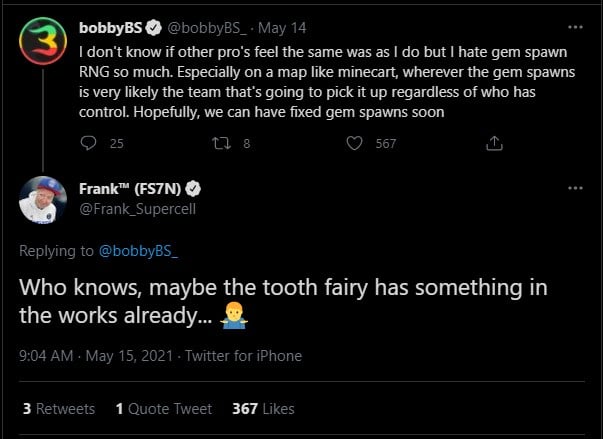 Frank himself unexpectedly responded to this news, indirectly announcing that Supercell is already working on it.

It is completely unknown how this mode will be changed and when exactly. For now, the only conclusion that can be drawn from this is that Supercell is working on fixing Gem Grab by reducing the randomness of gems spawns.