Leveling up in COD Warzone was kind of a tradition, but that has changed over time.

In the past, it was an annual tradition for Call of Duty: Warzone players to level up. Even so, this has changed a bit in recent years, because in addition to your personal level, you also need to level up your weapons to get the best attachments for them, but nowadays there are so many of them that it can become quite tiresome.

In addition, the big problem is the fact that weekends and tokens with double XP do not work.

What is happening with the Double XP in COD Warzone?

There have been a lot of complaints from players who say that double XP on weekends and for tokens is not working and sometimes they just waste it.

They often give a weekend of double weapon XP and ends up being total bullshit. It doesn’t work all weekend. They will never fix it or acknowledge it. Really stupid and discouraging. – one Reddit user noticed.

We used to be able to stack Double XP tokens with Double XP on the weekend for a total of 4X, but [this option] no longer works since that update. – another player wrote.

The community started reporting the issue en masse on Twitter, sometimes even involving famous game developers, but that didn’t help much: 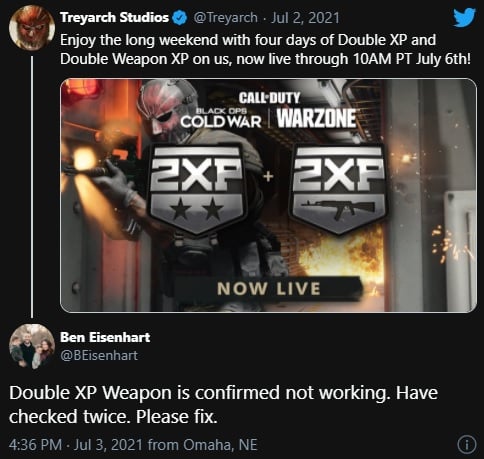 It remains to be hoped that the developers will finally take this problem seriously and decide to fix it. At the moment, this is quite a problem that clearly tires a large part of the Call of Duty: Warzone community.