The new map is getting closer to Call of Duty: Warzone. There are some leaks about the upcoming battlefield.

For over a year of Call of Duty: Warzone, the community craves any information about the new map. It would be a great variety to the game and certainly, attract bored players again. Early rumors and “leaks” indicated that the action would be relocated from Verdansk to the Urals. It turns out, however, that the plans may be slightly different.

What do we know about a new map in CoD Warzone?

Everyone is looking forward to Season 3, which could be a crucial season for Verdansk. However, there’s a new leak that shines more light on the new Call of Duty: Warzone map. According to it, Ural is indeed under development, but it is to be created for Blackout, not Warzone.

It turns out that the “new map” will actually be … a refreshment of Verdansk that will take us back to the 1980s. 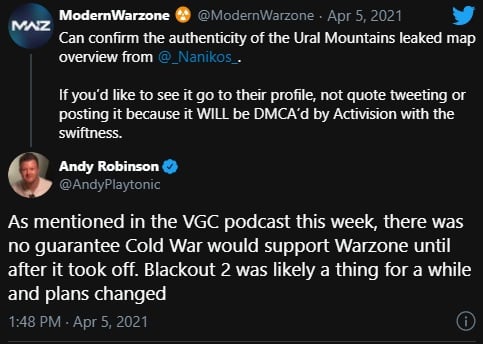 All indications are that the Ural Mountains map once existed, but there is no guarantee that they will ever see the light of day in the COD Warzone. Perhaps some elements will be implemented to another patch in the future, but for now, a completely new and different map remains out of the pool.

At the moment it is difficult to say what the developers are going to do with Verdansk as there is no official information about it. Season 3 of Warzone begins on April 22, so there’s little time to find out.