This is a very important change when it comes to CS: GO.

Valve has changed the guidelines for events they host. From now on, not every VAC Ban will disqualify players. This is an opportunity for professionals who were punished by the game system a long time ago. This decision was made for the RMR 2021 season, so it will apply from this year.

It’s hard to say if this is an effect of players switching to Valorant, but you can definitely suspect that Riot’s production was more or less important here.

READ MORE
What does an item in CSGO for saving your inventory look and work like? The player’s concept

VAC Ban has always prevented developers from taking part in CSGO events organized by Valve. It’s just a thing of the past now. Players whose penalty was imposed more than 5 years ago may take part in the competition. Of course, Gabe Newell and Co. had to give some exception to this rule and disqualify players who received such a penalty after their first participation in a Valve tournament.

The decision gives a chance to many talented people, such as Jamppi, who has already brought a lawsuit against developers.

In Valve’s statement we read: 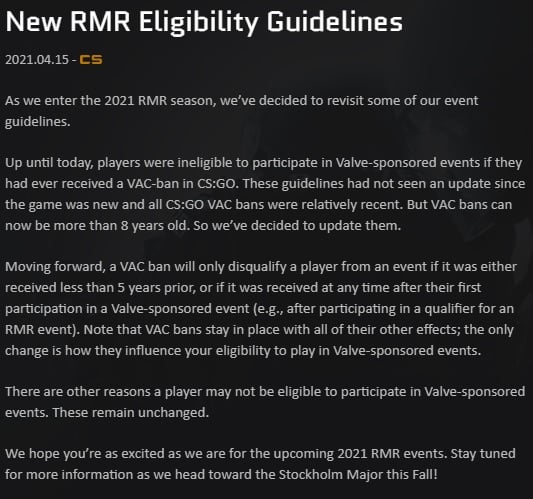 It’s hard to say what made Valve make such a decision. Either way, many talented pro gamers will not be punished for what they committed in their childhood..