Yesterday, a new, quite significant update was introduced to CS: GO. Today there is another one with a standard size.

Another update has been released to CS: GO today. As expected, it is to fix the bugs that appeared after yesterday’s update. Gamers laugh that there has been a return to the standard size of the update.

Why? The new patch is 3MB in size, most of them won’t even notice that they have downloaded anything at all. The update is so small that Valve has not released any description, but players know exactly what has changed.

READ MORE
What is CSGO better at than Valorant? According to professional gamers, there is one most important thing

The only reason the new update was released was due to bugs with selecting your favorite workshop maps. Many people reported that there are problems with this:

So it seems that today’s 3MB update fixes these problems, at least unofficially. 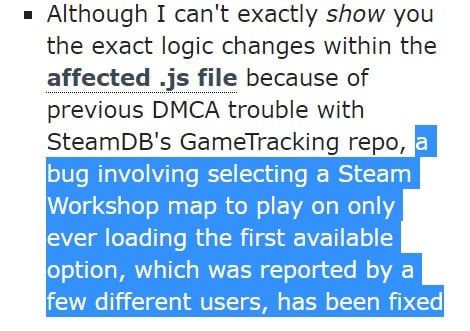 And that’s really all that has changed. The rest of the bugs are still unrepaired, so it is possible that we will have another such update tomorrow.