Discussions regarding yesterday’s update continue. The community’s stance is clear – this is one of the least thought-out updates.

The controversy really started a few minutes after Valve announced all the news. You can easily distinguish several stages here that the players went through yesterday:

Now the community narrative is clear: Players would rather pay a dollar or even more, but free themselves from cheaters once and for all.

Players would prefer to pay for getting rid of cheaters

You can see practically the same opinions on Twitter or Reddit. The system of paid accounts is simply not working anymore and it’s time to introduce additional security measures that will be able to protect players from cheaters.

It is similar with other features that should have been added long ago, including 128-tickrate. Gamers will genuinely throw small amounts to get Valve finally moving on the issues that are by far the most important. 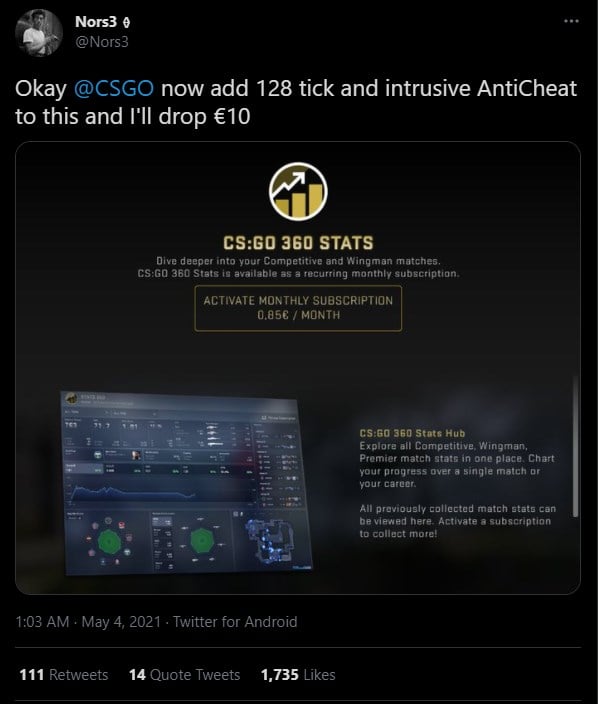 If Valve actually went in this direction, the industry would definitely tear developers apart for hiding better security behind a paywall.

This, however, shows well the current state of CS:GO. Players are ready to pay for solutions that, for example, in Valorant are free. Riot struggled with that too, but now their FPS is virtually cheater-free, thanks to Vanguard analyzing literally everything on the computer. People were very divided as to whether the anti-cheat should analyze so much, but after a while, you can see that this is the only way to stop cheaters.