Former Valve developer talks about how the company works. It also mentions a bit about the operation of the CS:GO engine and Source 2.

Richard Geldreich is one of Valve’s former employees and former Counter-Strike: Global Offensive developers. In his social media, he has published some very interesting entries that somewhat reveal the activities of Gabe Newell’s company.

READ MORE
It’s hard to realize, but it’s Nuke from CSGO. Gamers show Valve how much unused potential they have

What does Geldreich say about Valve and Source 2?

One of the entries from the former CS: GO developer is concerning. According to his statement, every year Valve begins a cycle of layoffs throughout the company “like clockwork”, then the company “vacation” begins, bonuses are paid and new employees are hired.

According to Geldreich, if Valve can’t adjust the game’s shift from one engine to another in one of the above cycles, it can be quite a tough endeavor. After all, it is difficult to do one job in “every now and then” way.

In addition, the Source 2 engine can make CS: GO completely different. There will be some differences, such as in game physics and the way you create a network.

The Source 1 version has some really ancient code in ther.

That code can’t be touched because it would break thing, sometimes in extremely subtle ways. It would take some very careful software engineering to pull it off.

Even the tinies detail of rendering contributes to how CS:GO works and feels. If the smallest details are changed the game is different. 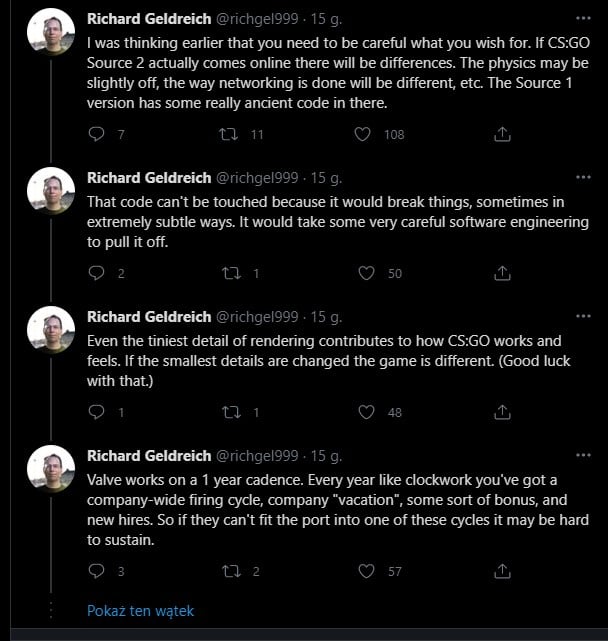 It’s hard to say whether Valve will switch to the Source 2 engine. It would have to take a lot of dedication or simply extremely fast work on what could conflict with the accuracy of execution.