The cheaters finally did it. Their sensitive data leaked due to a hacked CS: GO private cheat service.

Counter-Strike: Global Offensive cheaters may feel threatened, and this time it’s not a ban from Valve’s developers. Well, a week ago, one of the largest and longest-running CS: GO cheat services was hacked. The computer of every cheater who has used this software was infected with a virus.

Sounds too good? That’s not everything. All logins, passwords, e-mail addresses, logs of the server, forum, and Discord are leaked. In addition, the hackers got all the information about the creator of the cheat. 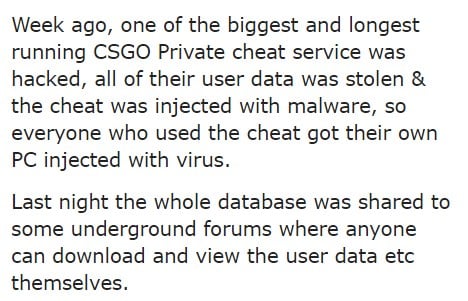 READ MORE
CSGO is back to normal when it comes to update size. What has changed today?

In addition to the virus that has infected cheaters, this specific community also has to worry about the fact that last night the entire database was made available on underground forums. At present, literally, anyone can download it and view user data on their own. The scam site has now moved to a new server and all its services are not operational at the moment.

“The news spreads very quickly, so the cheaters have probably lost their accounts by now. As we read in the main Reddit thread:

The entire site has now been moved to a new server, at the moment all their services are down (forums, cheats etc). “

The data that is currently being shared on underground forums include:

It looks like Valve’s servers will have far fewer cheaters for a while. It is difficult to say what the reason for the attack was, but some players believe that it was done by irritated by cheaters members of the Counter-Strike: Global Offensive community.