Surprising statistics on the number of players during MMs in CS: GO.

SteamDB ran statistics on matchmaking in Counter-Strike: Global Offensive. This research shows how many players use the Ranked Tournament feature of a region-specific game.

There are some very interesting conclusions to be drawn from this, which may be a bit surprising. What is it actually about?

Players from the US region hardly ever play matchmaking

As you can see in the chart below – the vast majority of CS: GO players who play MM come from Northern Europe. This is not a big surprise, because we are talking about a really large base of players who are clearly more likely to choose Valve servers from, for example, Faceit or ESEA.

However, the situation is somewhat different in the US region. There, the number of players fluctuates around 25,000, which is about 6 times less than in the EU. Moreover, the US is divided into 5 different regions. 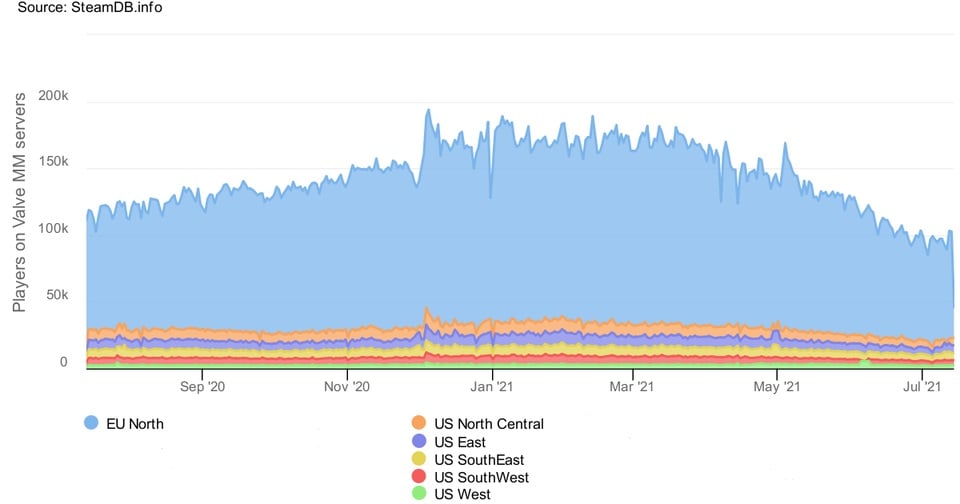 You can imagine how long it takes to get a match in those regions. In European time, this can sometimes reach from 2 to 5 minutes, while there the situation must be much worse. It would seem that that region is also quite popular, but apparently, some players have fled to other platforms or do not play ranked matches at all.

For now, Counter-Strike is experiencing some kind of player crisis, as we have already reported in this article.