HLTV ranks the world’s top-earning teams in 2021. Who is on top?

The best Counter-Strike: Global Offensive teams have a chance to take part in the most prestigious tournaments in the world. This means a lot of money to win, but first, you have to defeat the other opponents who are also considered to be among the best. Which formations made the most money in 2021?

READ MORE
The best investment in the history of CSGO? The player spent $ 137 about 7 years ago, and today…

Natus Vincere collected $ 400,000 for the victory in the Intel Extreme Masters Cologne 2021 competition. This allowed them to take first place in the ranking of the best-earning teams in the world. The Russian Gambit is also next, followed by formations such as Astralis, Virtus.pro, or G2. The latter earned only a few hundred thousand dollars and are far behind the Russian teams. 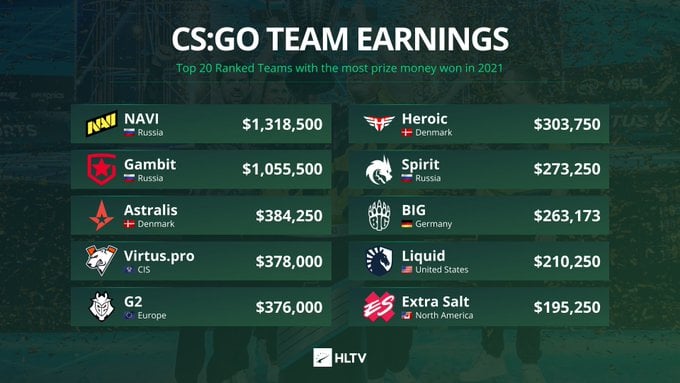 As you can see – the earnings from subsequent positions are not as stunning as in the case of Na`Vi or Gambit, but we are still talking about quite a lot of money.

There is still a lot of time until the end of the year, so it can be expected that this ranking will slightly change. Either way, Natus Vincere can be proud of their results and their rank as the highest-earning CSGO formation in the world.