Valve explicitly asked to report such behavior, so now the studio has been flooded with information about people boosting accounts.

Yesterday, the news that Valve is starting to ban accounts that serve or have something to do with boosting appeared. The studio also asked players to report suspicious accounts themselves. 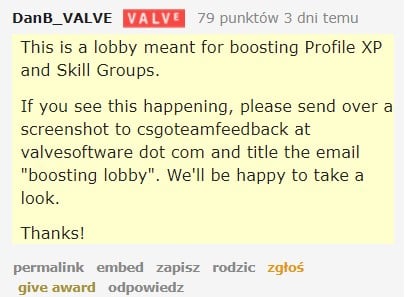 We didn’t have to wait long for the effects. There are quite a few screenshots on the web showing e-mails filled with various pieces of evidence.

A Reddit user with the nickname “Birkir” writes that it took him about 10 minutes to collect all the evidence for about 40 people. It was enough to cut everything out thanks to Streamable and it was ready. Emails sent to Valve worked:

“It took me about 10 minutes to submit 40 accounts for boosting, which is roughly the same as doing 1 Overwatch case.”

To this was also attached a screen from various e-mails and Valve’s response that an action was taken against the reported accounts, as a result of which they were permanently banned

This is definitely good news for anyone who doesn’t like boosting practices. The question is whether such reports will have any impact on CS: GO in the long run.