The fact that CS: GO is surprising in terms of various errors is known to everyone, but hardly anyone expected that the FPS drops may be dependent on this particular thing.

There are many reasons for the decline in FPS in CS: GO. Of course, the basic problem is usually the player’s equipment. Sometimes, however, we can have a computer for several thousand, and Global Offensive will stutter anyway.

One Reddit user with the nickname “UtMedPacket” was surprised that his main account has much less FPS than his secondary account. It quickly turned out that this was not just his case.

READ MORE
How much can you earn in CSGO? The ranking of the best earning teams shows that the situation is…

What is the reason for the FPS drops?

That’s one thing you don’t know until you know it. In fact, your computers can squeeze a lot more FPS, but something is just blocking them. That thing is, in this case, a friend list.

The player had a drop in FPS on his main account with a large number of friends. So he was advised to limit the accounts he has added to the list of people he knows. This method… worked.

If you have a lot of friends, it is worth considering not removing them, but making a second test account. Of course, you won’t have Prime there, but that’s not even the point. It is enough to enter CS: GO on a clean sheet and see the number of FPS. If it is bigger, then you have the answer to where your FPS went. 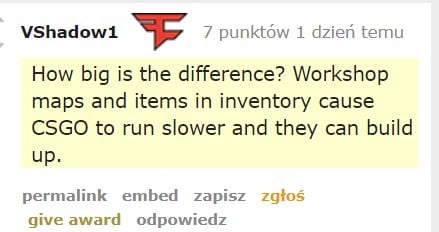 It’s worth mentioning here that this is likely a general issue with Steam. Players comment that even fewer skins on the account or fewer downloaded maps affect the frames.