A new update has appeared in CS:GO, which, interestingly, has already received its description on the official website.

Players who expect big changes in the upcoming patch or that it will be incredibly big, unfortunately, this time will not see it. Valve has made a few improvements to the CS: GO interface, in addition to updating one of the maps.

The most attention was paid to the update of the “AI behavior trees” and no wonder – almost immediately there were speculations that if Valve was interfering with bots and their new behaviors, it could herald a new operation.

And it makes perfect sense. It is possible that Valve is updating bots to introduce a new game mode or just an operation. Though there is some explanation for these changes that was provided by another Reddit user.

READ MORE
Which countries are the strongest in CSGO and build the top of the professional scene?

The whole update boils down to a dozen or so points, of which the most interesting is of course the bots section. This is typically a technical description and should mean that bots now have new animations and possibilities.

Why do bots need something like this? SmokeyZ17 believes these changes were made at the request of the community. 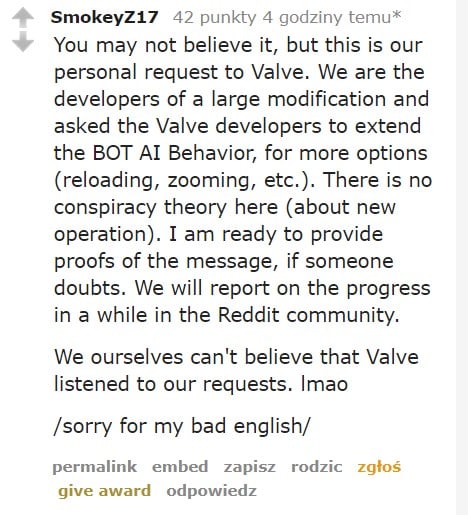 As we read, unfortunately, this is not a preview of the operation or the game mode. Although it is not said that Valve will not use it in the new game mode or other news. Funnily enough, the player himself cannot believe that Valve has complied with the group’s requests.