The world-famous CS: GO pro-player Xantres has been banned from Twitch.

A professional Counter-Strike: Global Offensive player, Xantres, broadcast very often on the Twitch platform. His streams were very loose and as a rule, nothing inappropriate happened there, at least according to the viewers.

We already know officially what was the reason for the ban. According to the platform, it was a community violation – this is usually the case in the absence of chat moderation. The channel was the 19th largest Turkish Twitch stream. 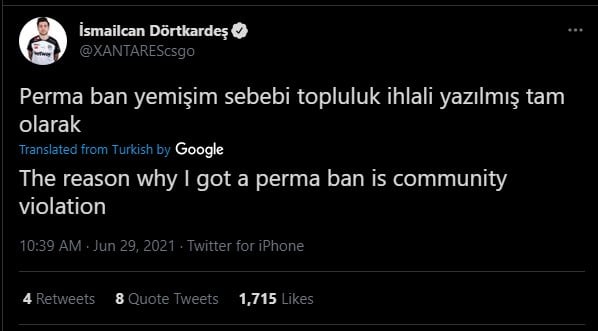 “When I’m enthusiastic about something, it always goes away”

On average, the broadcasts were watched by 6.2 thousand people. In Xantres, he had over 547,000 followers. The pro-player wrote in his social media that:

“I got banned from Twitch, I don’t know why, but I definitely deserved it, it’s not their fault bro” – Xantres said sarcastically.

“My life is like that, when I’m enthusiastic about something, it goes away.

No date email sent, no reason given, so we’ll wait and see. “ 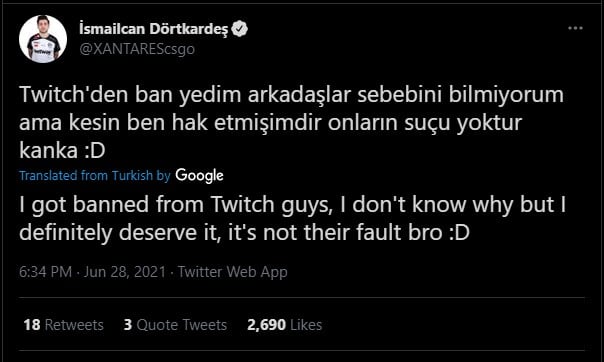 Then there was confirmation that it was a community-related violation. This reason appears relatively often and in various situations. This is most likely about inadequate chat moderation.

So far, Twitch has not responded to the matter and has not reacted to it in any way and it will rather remain so. Of course, there are two types of permanent blockages. One can appeal against one, and not in the case of the other. In this case, it is probably an appealable perm.