Twice as many CSGO bans in the last few days. Valve has finally decided to deal with cheaters?

The Counter-Strike: Global Offensive community has noticed that in recent days many players who were suspected of cheating have been fined VAC Ban. Probably, Valve developers have finally decided to tackle the problem of cheaters and eliminate at least some of them from the servers. The number of VACs issued has doubled in recent days. 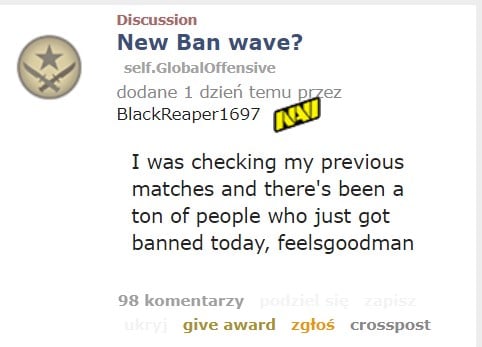 It was noticed by the players themselves, who asked directly if something had changed, because, according to them, Valve began to ban more.

READ MORE
You’ll be surprised, but this decision by Valve over CSGO made sense, at least from that perspective

It is difficult to say what the scale of the bans is, but the websites tracking CS:GO accounts have seen a visible jump. It applies to bans as well as unbans. Neither of these services are incredibly accurate, so the exact number remains unknown.

The CSGO community has been asking developers to tackle the cheater problem for a long time. In recent weeks, those have been taking over CS servers, especially at higher ranks. We have known for several days why Valve is not communicating properly with players, so one can only assume that one of the popular cheats has been detected and these are the effects of it.