Silvers don’t want to play Nuke. The reason being the idea for the content of one of the CS:GO YouTubers.

One of Counter-Strike: Global Offensive YouTubers – FranzJ – decided to create content at the expense of weaker players. On low-ranking accounts oscillating around Silver, he trolls both his teammates and opponents.

It’s no secret that players with silver are not likely to be a big challenge for people with one of the highest ranks in CS:GO. YouTubers have often heavily influenced Valve’s production, but so far there has not been a case of players genuinely afraid of entering the game.

Of course, all the content generates a lot of funny situations, but YouTuber is imitated by many fans who also come to Nuke to play with weaker players. Trolls taking down their teammates or smurfs who have no problem with shooting one-taps at opponents who can watch their rivals for a long time before firing. Unfortunately, not everyone laughs. This topic has even been raised more widely on Reddit, causing a lot of controversies. 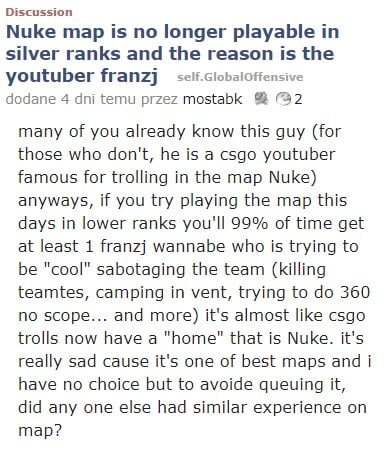 All this, according to the community, causes increasing frustration of players, and thus reduces their willingness to play. Below you can see an excerpt from one of the YouTube videos:

Such behavior only harms the Counter-Strike community, which already gets irritated by cheaters.