The change made to the /me command frustrated the streamer and viewer community.

On April 28, Twitch announced that it was changing the “/me” chat command, specifically the way it works. Until now, this command was used to send messages of the same color to interlocutors, mainly for a kind of fun. However, this turned out to cause some problems for streamers, as some viewers deceived streamers and other chat participants into thinking they donated.

Therefore, the developers decided to counteract such problems and make some changes.

How does the “/me” command work now?

From now on, the “/ me” command makes the text italic, but the color remains the same. Streamers are not satisfied with this change as the command is often very useful. In addition, according to the Twitch community, it should take care of much more serious matters, because the platform has a lot of other problems that should take a higher place in the hierarchy. 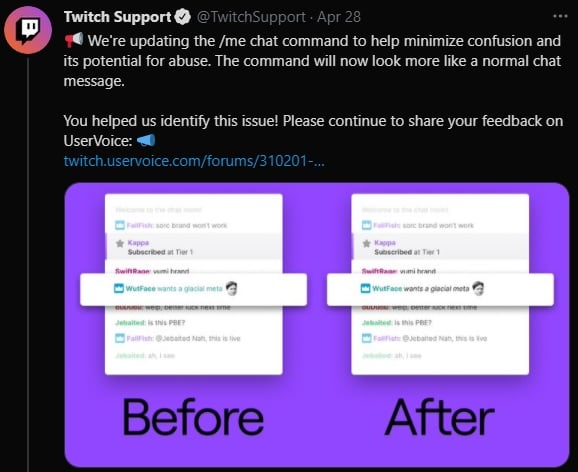 The community also proposes to allow the use of the “/me” command, which gives color to text, to moderators. This would be a pretty sane option as this command would be most useful to someone with that role.

It is hard to say whether Twitch wants to listen to streamers and viewers and return to the previous state of the “/me” command or even introduce further changes. Everything will resolve itself in the coming days.