He once fought for TOP 1 on Twitch, today he is suing the platform for receiving a permanent ban.

DrDisrespect’s ban is by far the most mysterious suspension in Twitch history. Interestingly, the streamer has known for months what he was banned for. Despite this, he does not want to comment on the topic of suing a platform

It is known that his 5 years of work have been somewhat buried. As DrDisrespect says, he is currently making roughly 1/4 of what he used to on Twitch. In addition, he struggles with constant questions from sponsors about a ban.

DrDisrespect about his ban

After the Twitch ban, the streamer switched to Youtube, where he was doing quite well. In total, he managed to maintain these several million views per month. The latest decline is due to videos being deleted. 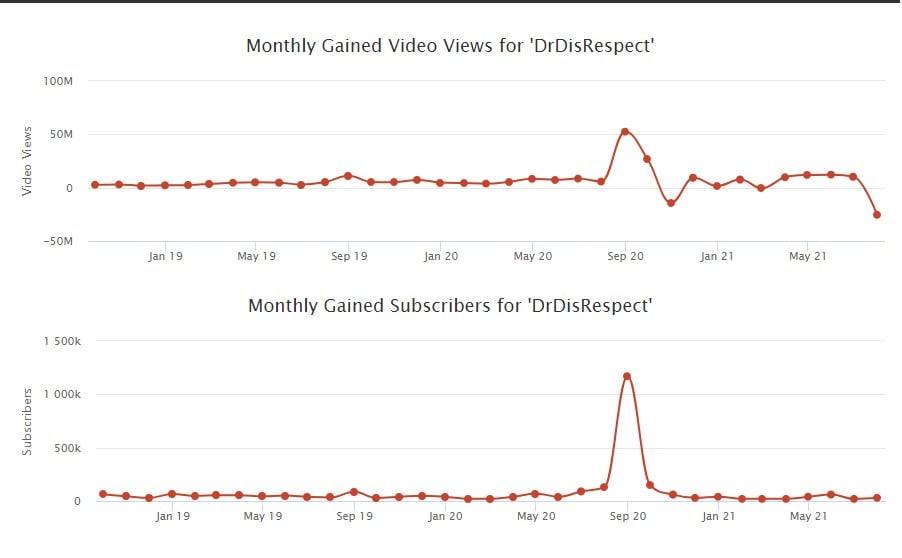 DrDisrespect continues to receive tens of thousands of subscriptions a month. Still, he is not able to earn as much as on Twitch. In the last video, we hear that the streamer has many problems, mainly image-wise. Not everyone wants to partner with someone who has been banned from TTV for breaking ToS.

This ban still raises many doubts, because neither one nor the other side wants to talk about it too much. It is known that the streamer did something that was against the rules. In the past, it was said that he was supposed to outright blackmail Twitch into joining Mixer, but this has never been confirmed.

DrDisrespect is not the first and probably not the last streamer to sue Twitch for receiving a ban. PlahntomL0rd finally won his case. TTV had to pay a $ 20,000 fine, which – as you can guess – did not change much. The ban was not removed.