If anyone doubted the existence of a blacklist on Twitch, now comes the final confirmation.

The so-called “Pool streams” arouse a lot of controversy from the very moment they appeared on Twitch. Everyone knows what’s going on – it’s a way of showing more of your body to your viewers. Female streamers (though more and more often male ones as well, more for memes and parody of the whole situation) set up a swimming pool in the room, put on a swimsuit, and broadcast their conversations with viewers.

Now, however, the situation is starting to get complicated. Amouranth, a leader in these kinds of streams, announced on her Twitter that she had received a message from Twitch that they stopped showing ads on her streams.

READ MORE
Pokimane streamed from the pool, breaking Twitch’s record for this type of broadcast

No more advertising on such broadcasts

According to what we read, the panel with ads has been turned off completely due to the fact that the content presented by her is inappropriate for advertisers. This is one of the first, if not the first such case in the history of the platform. 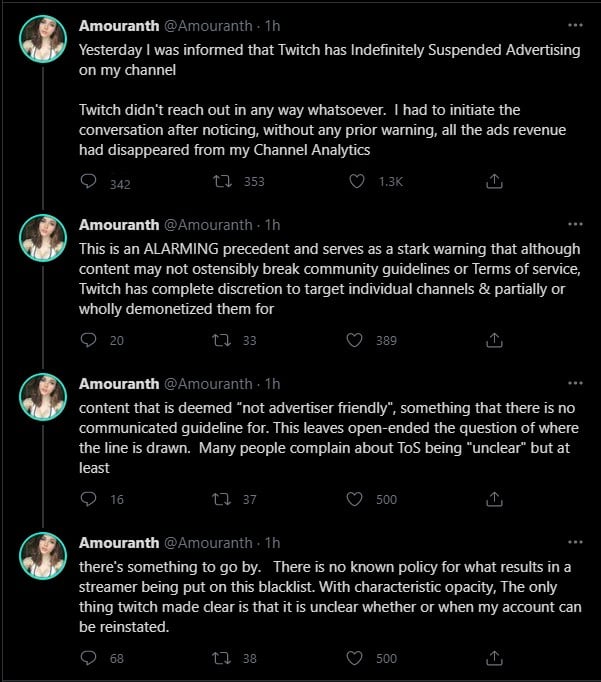 At the same time, it confirms theories that Twitch worked on or even introduced a kind of blacklist, i.e. streamers for whom ads are to be avoided. Does this mean that this is the definite end of this type of broadcast?

Definitely not. Ads have recently been treated as an add-on anyway. These types of streamers live mainly from donations and subscriptions. If viewers stop paying their money, the streamers will actually have no benefit from broadcasting on Twitch apart from advertising for their other social media and often 18+ content.