OnlyFans brings together artists, photographers or people who show their hobbies, but it is most associated with adult content. This content will not be there soon.

OF gained popularity in a very short time, mainly due to the approval of 18+ materials. As it developed, the platform tried to raise additional funds, and this is where the problem arose. As reported by Bloomberg, it is about the pressure exerted by banking partners and payment companies.

This is a similar scenario to PH, so you know it’s serious. OF released its statement in which the platform confirms that adult content will be banned from October 2021, but there is a catch.

This will change OnlyFans forever

The statement says that as of October 1, 2021, it will be forbidden to publish content that is explicitly sexual. Interestingly, however, the content containing n*des is to be allowed, as long as it complies with the general principles of the website. The fact that we are also forced to star keywords may prove how difficult this issue is for websites in general. 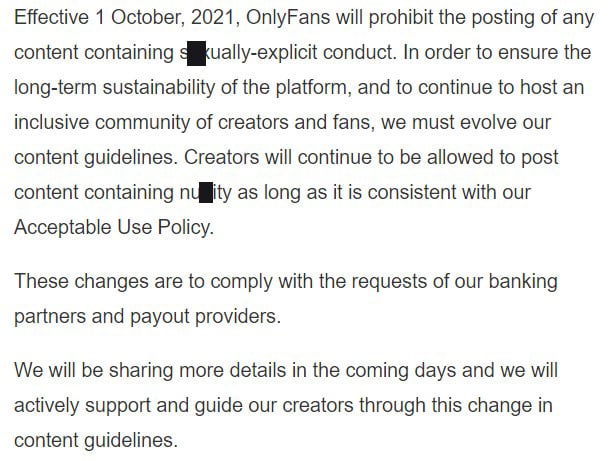 More details are to appear in the coming days – so far the whole world is wondering how it will affect OF and, above all, what will be the difference between films aimed at 18+ and the aforementioned nudity.

It can be suspected that OF will simply turn into paid Instagram. And that’s what it was said about OF, so not much will change in this regard. Already on the platform millions are earning profiles that even “evaluate” swimwear. It’s the same with celebrity accounts, which only add a bit spicier photos than those on Instagram.