Many Twitch users and developers have protested about the emerging trend for “pool streams” that bypasses the platform’s rules and allows bikini streaming. Although viewers demanded to ban this type of practice, the platform took a different direction.

It was decided that they would create a new category specifically for such broadcasts, called Pools, Hot Tubs and Beaches, to give users the option to add it to the block list and the option for advertisers not to display advertisements on such broadcasts. Thanks to this, however, we can check the exact statistics of individual streams as well as the entire category. Who is dominating?

Twitch is one of the largest platforms created almost exclusively for live broadcasts. Recently, however, it has been dominated by streamers who bypass the regulations that do not allow skimpy outfits, through streams from the pool, beach, jacuzzi, and even bathtubs.

Previously, they were in the “Just Chatting” category, which both viewers and streamers who simply wanted to chat with fans did not like. Now they can sleep peacefully, because “swimming pools” have their own and – as we can see – it enjoys great popularity.

Since its creation on May 22, it has been watched for a total of 2 million 555 thousand hours and the average number of viewers is about 20 thousand. 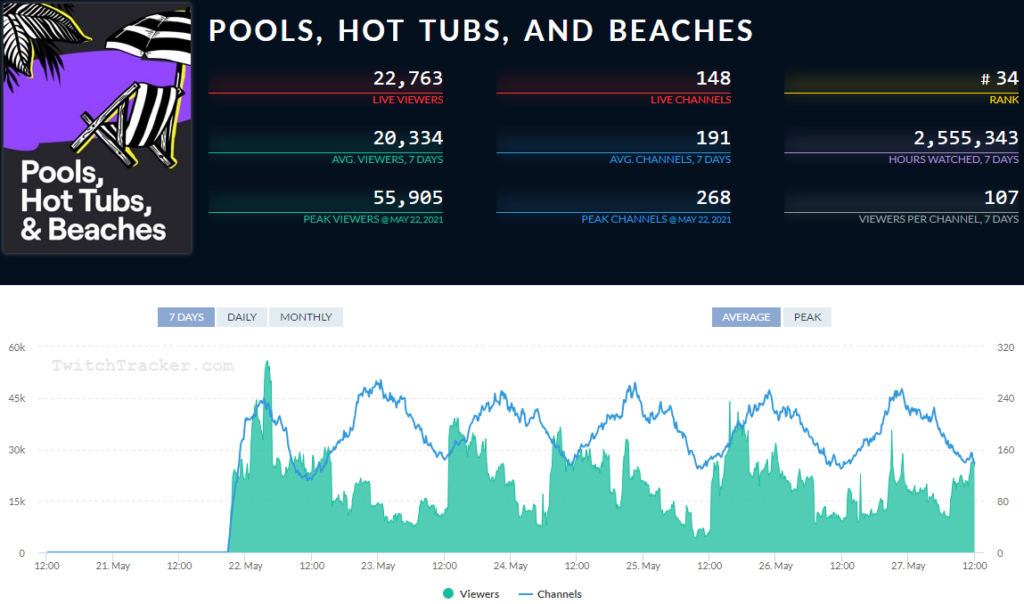 Who, however, is the most popular? Of course, Kaitlyn ‘Amouranth’ Siragusa, who outranked her rivals. Out of 1.4 million hours of TOP 10 streamers watched, as many as 500,000 belong to her. There were also Indiefoxx and sweet seals from the veterinary hospital – MarineMammalRescue.

As we can see, despite the fact that Twitch has made it difficult to earn from advertising, the category is very popular. The viewers in particular enjoy the appearance of channels with animals splashing around in the pools.