Twitch has just introduced custom animated emojis, and they are already being used.

As part of the tenth anniversary of the Twitch platform, the website owners decided to introduce custom, animated emoticons. Partners can create up to five of them, but already it is being overused.

One of the streamers decided to add an icon that aims to fake donations. This behavior may seem clever and funny, but a large part of the community considers it toxic.

READ MORE
Ninja just got his character in Raid Shadow Legends, a game that is about to overcome Twitch

What are the emotes created by the streamer?

“Redvines” subscribers, because that is the name used by the streamer who created these emoticons, can troll other streamers by making bogus donations. The originator himself decided to prank another, well-known streamer:

As you can see in the above material – emoticons look really realistic and it is impossible to distinguish them from a real donation. The incident ended when the streamer, suffering from chronic pain syndrome and threatened with homelessness, was deceived by this joke. The bogus donation of $ 5,400 might have changed their life significantly, but unfortunately, it wasn’t real. 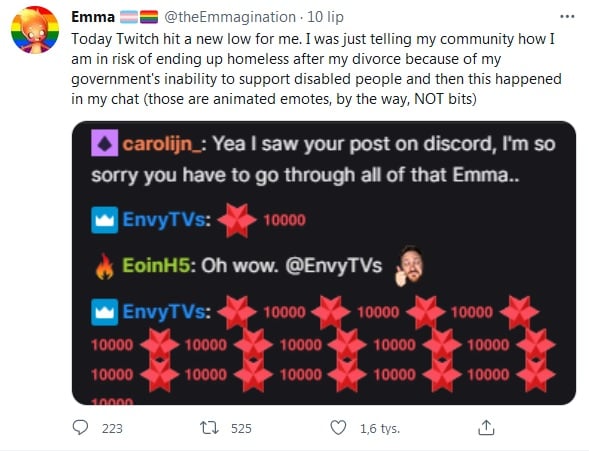 After the whole situation with Emmagination, Redvines removed the emotes and apologized for the whole situation. According to his words – initially it was supposed to be only an innocent joke, but eventually turned into something toxic and inappropriate.