It’s getting really weird. Twitch looks less and less like a gaming platform.

It’s safe to say that Twitch has been taken over by commentary channels and streamers in the pools. Abroad, an increasing number of YouTubers are moving from Youtube to Twitch, whether it’s to play Minecraft, or to perform streams and podcasts from various dramas.

Both the drama and the pool stream are incredibly popular, so people started to adjust their content to the prevailing “meta”. More and more people are just streaming from the pools right now.

This time it ended with a ban

One streamer thought it would be a good idea to wear a bra and stream from the pool. Twitch was definitely not of the same opinion.

As a result, the channel was banned for 24 hours. However, it is difficult to say what the specific reason for the suspension was. 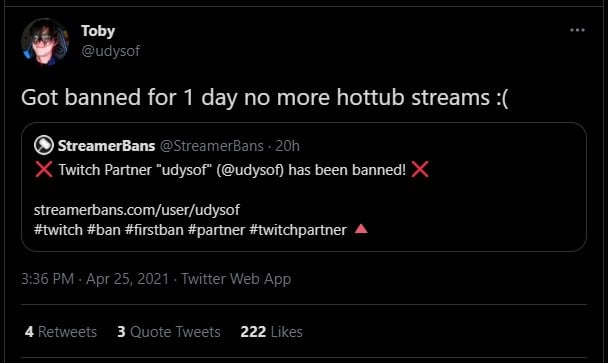 It was probably about violating one of the points regarding making fun of other streamers. Could the outfit itself be a reason for the ban? Probably not, but at the moment it is difficult to verify what exactly happened during this particular broadcast.