Twitch has been officially banned in Slovakia.

At this point, residents of Slovakia cannot watch Twitch. When entering TTV, they see the appropriate message that the website has been blocked:

It has not been officially confirmed, but many people are writing about it now. The likely reason is that one of the Slovaks is playing poker. And however bizarre it may sound, it is actually a big problem.

READ MORE
A mishap on Twitch. The couple made love with the camera and sound turned on. The roommate “saved” the situation

According to the Slovak media, at the moment the operator of O2 has blocked Twitch, while the rest have a few more days to do the same. As we read:

“Not all operators have to execute a court ruling all at once. They still have a few more days to put it into practice.” 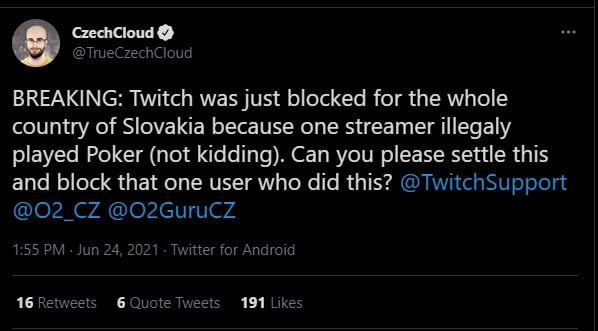 One of the streamers is supposed to be the reason. ddandis, with “just” 35,000 followers, played poker on Twitch. This apparently was enough, because social media writes about a judgment that all network operators must comply with.

There is indeed an entry on the government website. Exactly on the last page of the PDF.

So not only the link to a specific channel was blocked, but the entire platform. It is difficult to say how this situation will develop, we will definitely observe it.