It took only 4 years for Epic to develop this feature that nearly everyone has been waiting for.

Every day, players send various suggestions and concepts of what could be introduced to Fortnite. Many of these ideas have actually been implemented, others have been waiting in line for several years.

Now, leakers report that since Update 17.00, work has started on something that will definitely make the gameplay more enjoyable and help players who hate rearranging their weapons in their inventory.

Finally, after 4 years, it is coming

This solution is present in many Battle Royale games, so it was surprising Epic still hasn’t implemented it. What exactly is it about? The automatic assignment of weapons and items to inventory slots. For example: 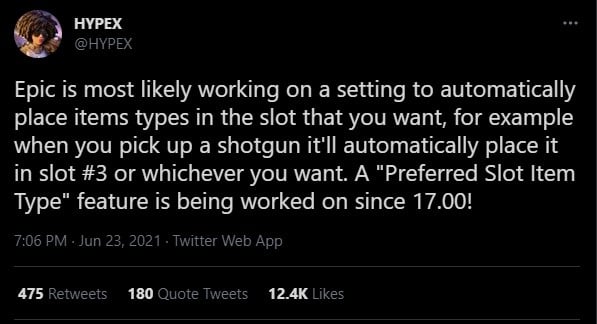 All without trying too much, the shotgun replaces the gun from the first slot and that’s it. Everything automatically. Console players who have been asking for such a solution for years will especially benefit from this.

Unfortunately, it is not known when this function will finally appear. It can be a matter of several days or several updates. Rather, Epic will not have to wait another 4 years for it.