It seems that the scenario from other summer periods is repeating itself. The servers are still in version 17.10.

Everyone is waiting for the next update that will introduce some major changes or cosmetic items to Fortnite. Meanwhile, leakers report that test servers remain on version 17.10.

What does it mean? Another update 17.20 delay. Epic may still release version 17.20 in the following hours, but it is unlikely to happen. The challenges for the next week are still here, so it looks like the patch will not be released in a dozen or so days, around July 20.

When is Fortnite update 17.20 comming?

If this information is confirmed, it means a total of one month of waiting for a new update. It would not be extremely outrageous, because in the previous years it was similar. Unfortunately, the summer period is connected with holidays. 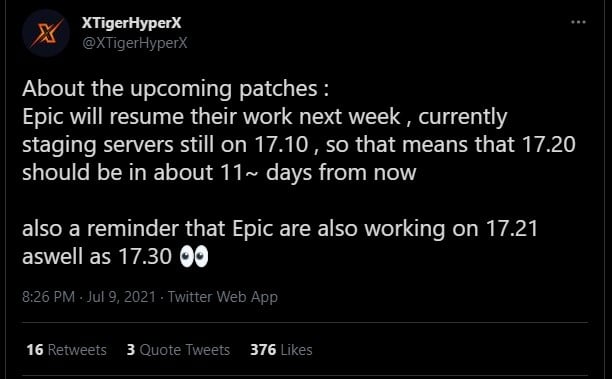 The good news concerns update 17.21 – a content update, maybe Epic will want to catch up later. What to expect on Tuesday? Changes like last week.

Maybe a new weapon will be added, maybe there will be small changes to the map, but that’s basically it. On Wednesday, of course, LeBron James will play the main role, and the rest is one big unknown.