Team Rumble is one of the most controversial modes right now, getting far too much attention lately.

After the start of Season 7, it turned out that Team Rumble has undergone many changes that make it impossible or rather difficult to complete the challenges. Gamers began to complain en masse, which resulted in sending surveys to the community yesterday.

After a few hours, Epic made the first decision, which is probably a harbinger of major changes.

READ MORE
How badly did Epic nerfed UFOs in Fortnite? In addition to nerfs, they have been removed from competitive modes

A dozen or so hours ago the time at which the glider opens has been changed. Epic has not written it anywhere, but in fact, the glider can be deployed later than normal. It just means that you will be on the island sooner. 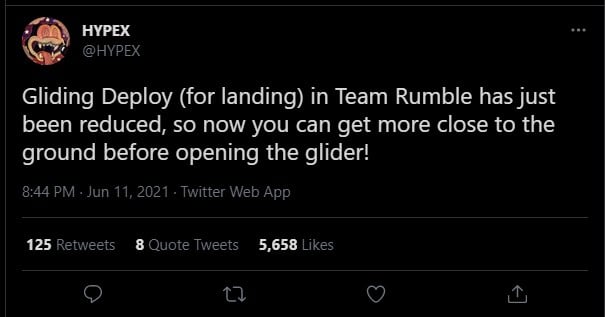 It can be expected that this is just the beginning of major and minor changes. You can see that Epic is already up to something, even before any update. It is strange, however, that the developers do not communicate it at all, and after all, it is very important news for many people.