Epic has abandoned a few things they created. With the latest weapons, the studio returned to the concept from many years ago.

Probably all older players know that Epic started talking with the community much more often. About two years ago Epic used to respond to someone, praise someone, comment on something every day.

t practically disappeared over time. There are still a few comments, but they are practically never about Fortnite news, balance changes, etc. All this led to the complete abandonment of publishing patch notes.

For several weeks, or in fact months, Epic has been publishing small update descriptions. On Twitter, a few hours before the update, there are short entries about what will be introduced. And although it did not arouse a lot of discussions, it was a good prognosis that maybe something will change in the future.

Now Epic has reverted to something that only OG players remember. Do you know that Epic used to publish videos with the description of new products a long time ago? Yes, it was 2017. You may be even more surprised after watching the latest Epic video regarding the recently introduced weapon.

Yes, this is a video from the studio about a new weapon. The developers haven’t been doing this for a good few years. That is why the community reacted so optimistically. You can see it in the comments: 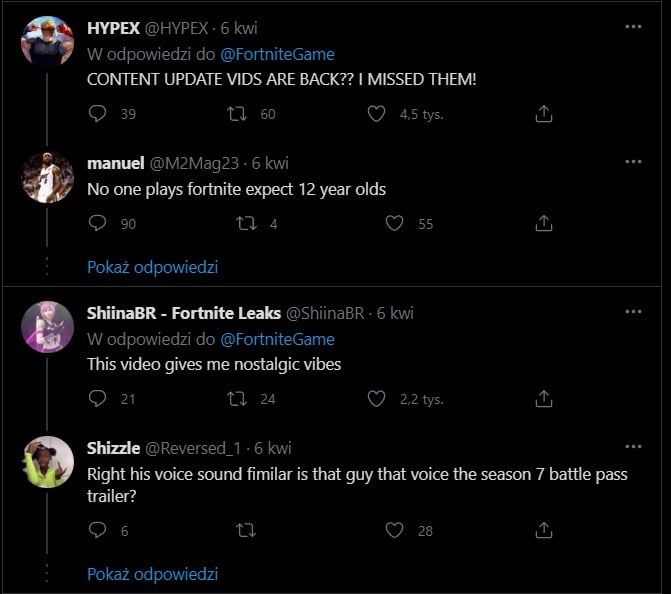 It is possible that not only videos but also content updates are coming back. These are smaller updates that add, for example, one new weapon and nothing else. The Fortnite cycle has looked the same over the years:

It’s hard to say if it’s actually coming back, but the video is a really good harbinger of the future.