Epic had a small slip-up, publishing information about the upcoming Midas skin too early.

Of course, it is not known whether this is a real slip-up or a way to promote the upcoming skin. However, it should be remembered that Epic very often has situations with publishing some information too early.

So it was this time. Directly in Fortnite and in the Epic client, a message appeared for a moment about a new Midas skin, specifically its summer version.

READ MORE
This is what the accelerated animation of ice melting looks like, i.e. a free Fortnite backpack

Since the information has already been prepared, the skin will probably appear in the next store. 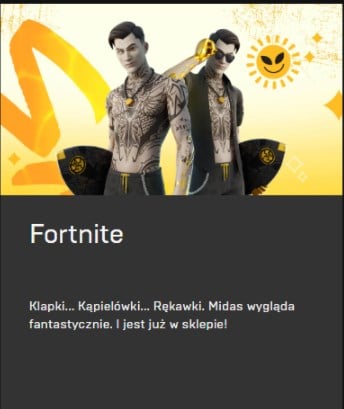 It’s hard to say how much this skin will cost. All that is known is that it will be introduced, probably sooner than later. You can see the full presentation of this skin below:

Will the skin be rare? Probably not, already many people say that they will want to buy the full package.