Ninja made his return to Fortnite a huge event, which resulted in a 300% increase in viewership.

Everyone knows Ninja, regardless of whether he has played Fortnite or not. After a few months, the streamer announced his return to Battle Royale to see what exactly had changed. The statistics from Twitch clearly show what the viewers expected from him. 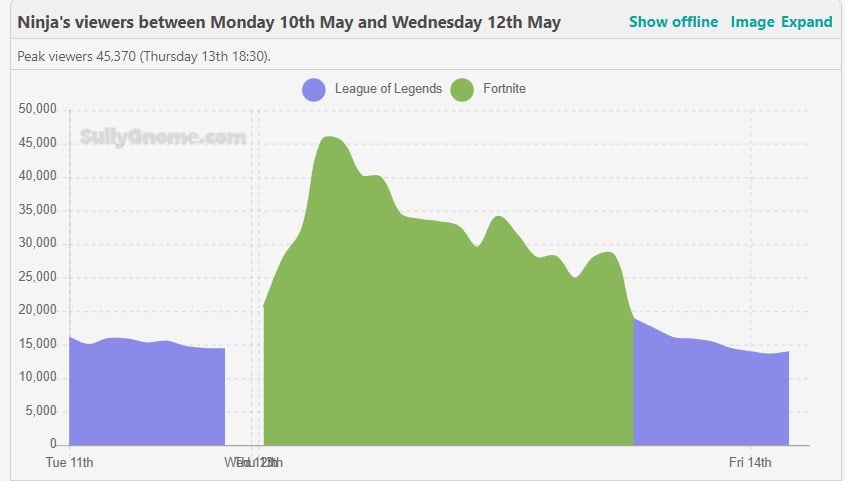 League of Legends is purple, Fortnite is green. Overall, this is a jump of a good 300% of the norm.

How much the most Ninja has earned in a month?

Ninja revealed, among other things, his record earnings during the stream. We’ve known for years that streamers earn a lot. For example, Dr. Disrespect or Shroud were to get a million dollars for streaming Apex Legends alone.

However, this is not much compared to how much the Ninja was supposed to earn. As we hear, in a month he managed to get… 5 million dollars. Most of this sum came from the creator’s code. This would be in line with earlier reports that he had to pay tax on $ 25 million.

„I think the most I made in a month from Fortnite developer code is around $ 5 million. I am not joking(…)”

Ninja probably doesn’t have to return to Fortnite for the sake of money. He has mentioned many times that he doesn’t have to do anything anymore and can just rest for the rest of his life. All because of how much he earned in 2018 and 2019.

His earnings are still high because although he is not so popular anymore, his broadcasts are still watched by 5-15 thousand people. By global standards, this is quite a good result, allowing you to earn money on an ongoing basis from advertising or donations.