A very interesting theory has arisen among Fortnite players regarding Zapatron and the current season.

Everyone knows Zapatron’s story. The weapon was in the game for several dozen minutes, and then it disappeared forever. Only one video with this weapon survived on the web – it was simply too OP.

Now players compare one of the new weapons and Zapatron, noticing many common features. Could it be that Zapatron is back, but in a different form?

READ MORE
It is known what the alien cube looks like directly in the game. Upcoming Fortnite Item

Zapatron is almost a legend. A weapon that very few people saw and used even less. In 2017, it just did not fit the Battle Royale of Epic at the time. Today is a bit different.

Because of this, players are looking at one of the weapons that was added in Season 7, and many people feel that Epic has benefited from the Zapatron concept here. Where did these conclusions come from? 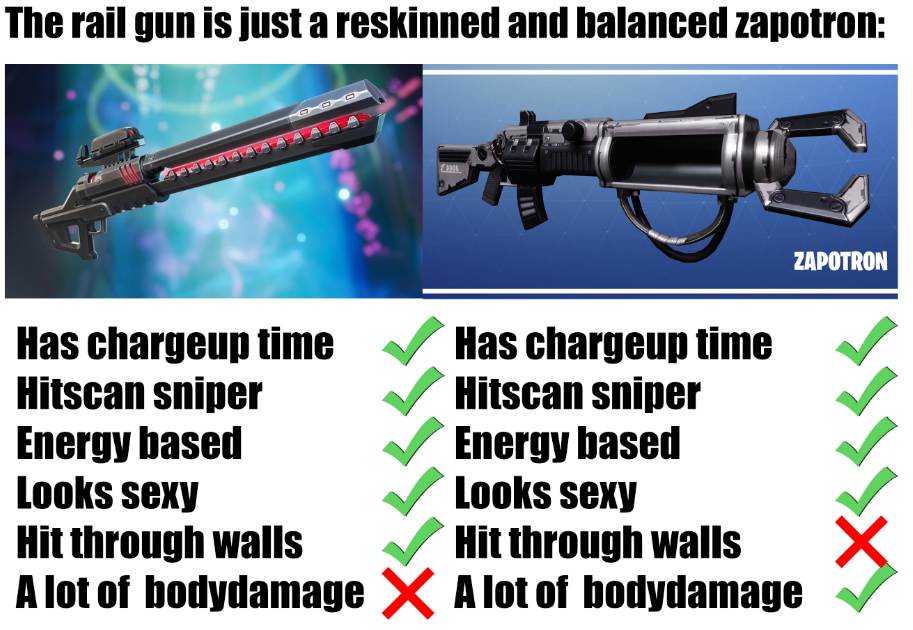 Rail Gun is to be a faithful reflection of Zapatron. The only differences are, of course, the appearance, the ability to shoot through walls and damage. While the theory is quite controversial, it makes a lot of sense.

One may be tempted to say that Rail Gun is, in a sense, a balanced version of Zapatron. Of course, this is a bit of an exaggeration, it’s possible that Epic did not think about it at all, and in the end, it just turned out to be similar.

Most of the features seem right:

A really interesting theory, even if it doesn’t have much to do with reality.