Yesterday, the whole world reported on the website fortnite.gg, which allows you to see how much exactly players’ lockers are worth.

Fortnite.gg, an external service, enabled yesterday a possibility to see the value of your locker. Epic responded quickly by issuing warnings that logging into these types of sites could be dangerous. The message appeared on Twitter, but also on Reddit. 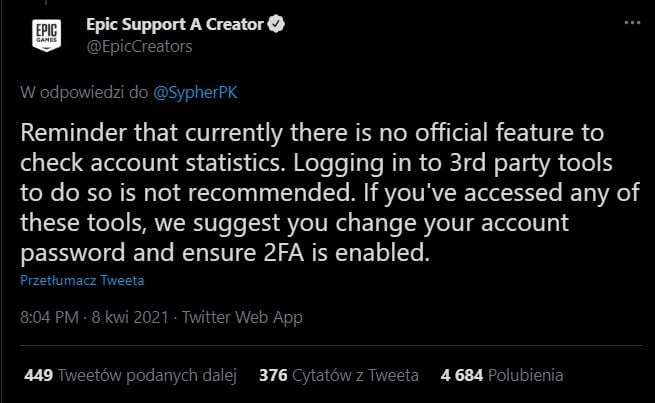 This combined with a technical issue with Epic and some were logged out. So the general panic of people who used Fortnite.gg began.

READ MORE
How to quickly find out how much your Fortnite lockers are worth and how much money you’ve spent?

Has anyone really been hacked?

Leakers and trusted people in the community began to reassure that logging in this way did not reveal the password. So they can’t just steal your account. HYPEX explicitly wrote that it is not the fault of Fortnite.gg, as were practically all other popular leakers.

Leakers even suspect that this is a deliberately detrimental act to discourage players from visiting Fortnite.gg. It is difficult to say whether this is actually the case. Perhaps the technical problems that caused the logout were simply an accident, and Epic only warned us by default.

Finally, the position of the service itself also appeared. This denies having anything to do with logging out, and states that no one who has accessed the site will be hacked.

What to do, how to live if you logged in to Fortnite.gg? As we wrote yesterday, such websites always carry some risk. Changing your passwords after using them just to be safe is a good idea. In this case, there is no indication that the site has somehow used logging to hijack accounts, but it’s worth being safe than sorry.