Yesterday, even before all skin leaks, very interesting information appeared.

The first news that appeared before the skin leaks was a very mysterious change of phrase. The YouTubers missed it, so it’s worth explaining what’s going on before their “1,500 Free V-Bucks” videos.

Information on this subject is not confirmed and should not be treated as such. Everything can still change here.

READ MORE
Epic shows how Fortnite emotes are made. Nobody has seen this so far

Normally such a phrase is used for various types of packages, but here it is difficult to associate it with something specific. Could it be a reference to some upcoming event where you will be able to unlock V-Bucks, or is it just a change to internal files that will never be used?

The only clue about this is the fact that Epic did not so much add this phrase as replaced an existing one. As leakers report, it’s about “St. Patrick’s Special” – a supplement to St. Patrick. 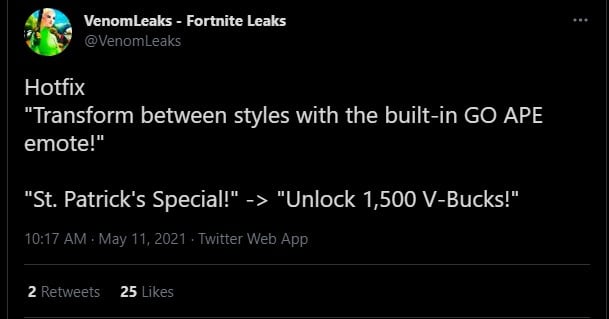 The only question is why Epic changed it. After all, St. Patrick’s Day was in March and it’s May. Skins inspired by this day come out every year, they will not appear suddenly and without an opportunity. It’s at least puzzling why the developers felt it needed to be updated.

Unless, in fact, this phrase will be used in many places, and its “source” does not matter much in this situation. There is a chance that it is about standardizing the messages, then it can still be about the upcoming news, and not St. Patrick’s Day as such.