Nearly all Fortnite players have asked, or are still asking themselves when Travis Scott will return.

Travis Scott as a skin was last available for purchase nearly 500 days ago. In the past, there were a lot of theories as to whether the skin would return or whether Travis Scott would ever have anything to do with Fortnite again.

And although a few clues seemed good, they did not change anything in the end. “qCandywing”, who had the opportunity to meet Donald Mustard again, asked him directly about Travis. What did the Fortnite Creative Director say?

What does Donald Mustard say?

It was to be expected that Mustard would not want to say directly: 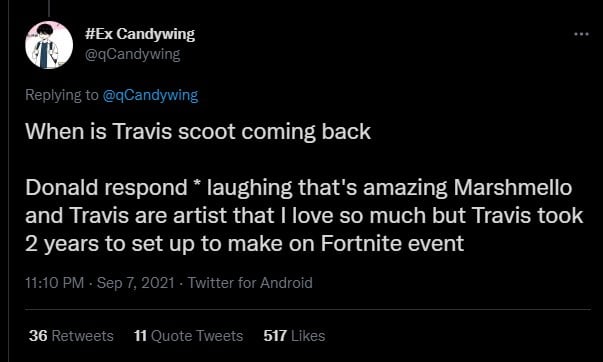 Wondering what the answer has to do with the question? Not only you. At the moment, players interpret it in different ways:

Regardless of the version, still as much is known as before asking this question. A pity, because it was a great opportunity to clarify the matter.