There is a new leak regarding GTA 6. This time it’s about a new job offer at Rockstar Games.

GTA 6 is a title that has been awaited for many years, but the developers have not yet given players any details about the game. What’s more, the title has not even been announced yet, but despite this, the community is constantly looking for any clues that would herald the coming of the title. There’s a new leak that links up with another that fans have come to know in the past. What’s this all about?

READ MORE
The GTA player made the impossible possible. Completing the game without dying in record time

This leak connects with the previous ones about GTA 6

There have been some leaks in the past that GTA 6 will have a massive marketing campaign that will include live events in GTA: Online. This is important because quite recently, developers published a job offer for a live operations coordinator. It seems to have a direct relationship and heralds the upcoming information on the sixth part of the production.

In the description of the position you can read that:

This role will be responsible for executing all in-game marketing campaigns for Red Dead Online and Grand Theft Auto Online. This is a full-time, permanent position based in our Soho, Mangattan studio. 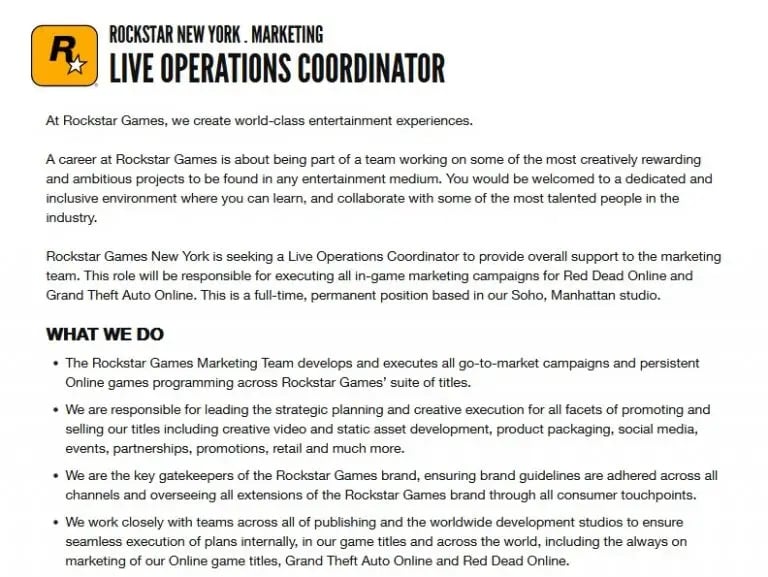 The announcement of GTA 6 via a GTA: Online event would be a truly bold move that would arouse great excitement among the community. Such an option seems to be really attractive and probable, especially since other producers implemented similar initiatives.