The creators of LoL have announced significant changes to the prestige system. However, that’s not all they plan to improve.

With the release of more prestigious skins, Riot announced upcoming changes to the related system, as well as general improvements to the Hextech workshop.

Among other things, players found out that Gemstones will be removed. There is also new information about the prestigious store.

What exactly can players expect?

One player asked what about unlocking older prestigious skins. Rioter did not answer directly if they would come back. However, this is to be expected as the message was not a refusal but was “Stay tuned.”

Another player wondered if there would be more prestigious stores like those that have appeared in the past in League of Legends. You could buy emotes or other prestigious content in them. Rioter replied that these types of stores will only appear in December.

Some commentators expressed their dissatisfaction, saying that Riot did not keep its word, and that limiting prestigious stores to one per year is unfair to players. Some of the people wrote that they were looking forward to the store in the summer, which is why they are now very disappointed.

I cant express how bad it feels to not be able to get the skins I want from prestige shop until December when we were told it would be mid year for months & months. I mean players kinda plan which passes to buy and events to play around promises like that.

Removing Gemstones from the game

Another important piece of information is that Riot wants to remove Gemstones. Players associate them primarily with skins from the Hextech workshop, such as Soulstealer Vayne or Hextech Annie. What happens when this type of currency is removed? Will players be compensated?

Gamestones from the game will be exchanged for something else. Yes, players who own them will get something in return. 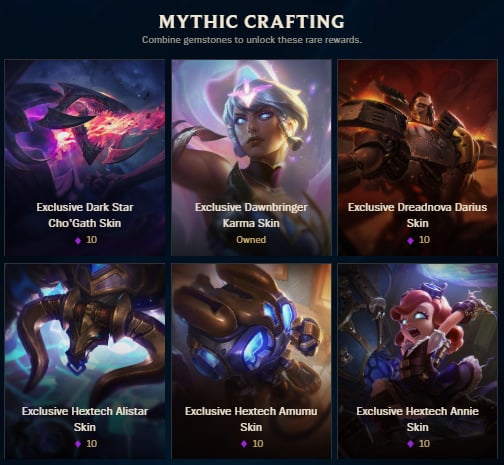 Interested players asked if it was worth spending the collected stones, or if it was better to wait until they were converted into something new. What will pay off more? Rioter wrote:

Your gamestones will be automatically converted to the new currency at an exchange rate that should be fair to players.

Another mechanic that is likely to be affected by the changes are re-rolls, but the designer noted that at the moment he cannot tell the fans anything more.