What interesting happened after Update 11.9?

Patch 11.9 was quite controversial, especially when it comes to one specific character. Of course, this is about Heimerdinger, whose nerf was mainly due to the synergy that the hero achieved while playing on the line with Senna.

Interestingly, he is not losing the most games at the moment. Gwen is no longer TOP 1 when it comes to the lowest win rate. Someone managed to outdo her.

READ MORE
Riot is responding, will it bring more Ixtal champions to League of Legends?

What happened after patch 11.9?

In addition to the Hecarim crash, we also have a decline in Heimerdinger popularity. Depending on the role, it has from 0.5% pickrate to a dizzying 0.7%. On some pages you can’t even see his statistics, it’s just too rarely played. Heimer’s most popular player, Tyler1, talked about it.

Of course, all this can change. After all, we are fresh from the update and the next heroes are slowly coming out of the 0.5% pick rate hole. In the case of Heimerdinger, it may be similar, although so far it is not expected to happen. 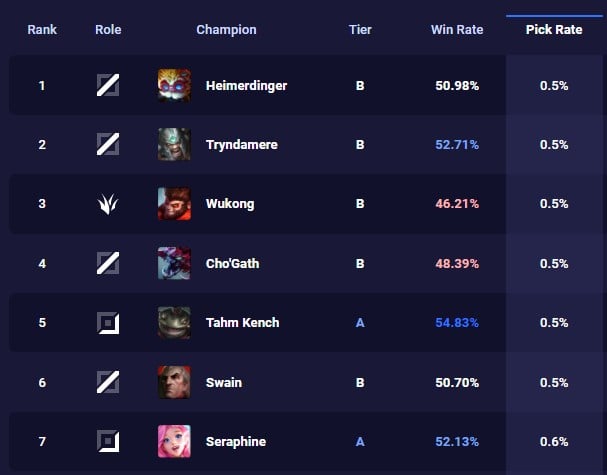 This is especially true for ranked games. The pages that sort heroes by pick rate finally take into account the number of matches played – in this case, even today Heimerdinger was in a record low place for him.

Gwen, on the other hand, has reasons to be pleased. According to unofficial statistics, she is no longer the most often losing character. Now it is none other than Ezreal. Quite surprisingly, he hasn’t gotten any changes recently. 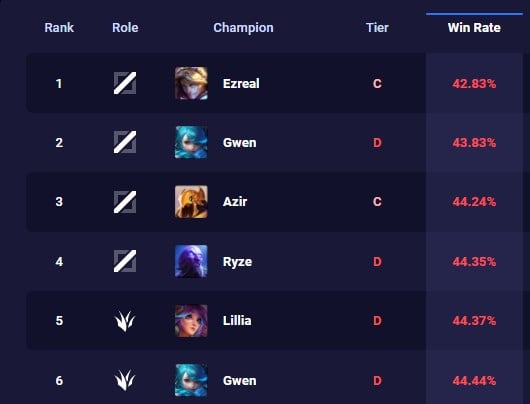 It turns out that with nearly 10,000 games registered at various ranks, Ezreal in the middle lane is losing the most games at the moment. However, it is worth mentioning that all ranks were taken into account here. This means that the higher the rank, the more Ezreal wins. Still, the best evidence of him is that he outdid Gwen – she seemed to be in a really terrible place with only 43% win rate.