The well-known streamer is fed up with playing LoL.

Streamer and Youtuber Jack “CouRage” Dunlop informed his fans that he was ending his League of Legends adventure thanks to his teammates who died too often.

Probably each of us knows how irritating such behavior can be. Especially when we try to win. Therefore, some are not surprised that he has decided to say goodbye to Riot’s production.

READ MORE
Officially, these skins were so bad that Riot is giving them up. But the bees will come back. New Akali and TF skins

League of Legends has a specific community and not everyone would like to be part of it. A lot of players think it is the most toxic of all known games and the people playing it are really terrible. Is that so? In part, probably yes, but you cannot put everyone in one bag. If we look well, we will find people who do not fit the description of the stereotypical LoL fan.

However, it was not the toxicity that made the streamer decide to uninstall the game 28 times after more than 10 years of adventure with it. It was because feeders made it difficult for him to win by feeding his opponent in the top lane. 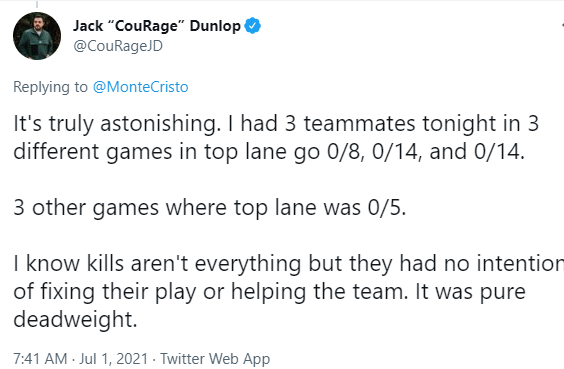 Jack Dunlop described the Silver Division community as terrible and the worst of all the games. He then shut down and uninstalled League of Legends.

Will he get over it and reinstall the game? We don’t know, but the number of times he left (28) might suggest that he didn’t do it permanently and will likely come back after he calms down a bit. This is a common practice among the Riot’s moba community. Pissed off after a lost match, players uninstall the League to start the next ranked on the second day or even a few hours later.