Players complain about the lack of variety in the mid-lane.

In the 2021 season, Riot wanted to introduce a lot of variety, and the builds and character choices for each lane were not to be monotonic. However, this doesn’t seem to be the case in mid-lane, which is currently dominated by one type of champion.

Players don’t like it and think that playing the same characters for the hundredth time is already boring and now there must be a hero in the middle to enter, eliminate the carry, and exit.

READ MORE
Why, despite Viego’s numerous bugs, he finally ended up on the professional LoL scene?

The choice of heroes for MID

There are over 150 characters in League of Legends for 5 different lines. Many of them have a completely different playstyle. Therefore, we can play an aggressive hero both on top, mid, and support, or less aggressive and standing behind. However, in the middle lane, you can only find picks, which involve entering the opposing team and eliminating a carry.

According to leagueofgraphs.com, these are the most popular characters currently on the MID: 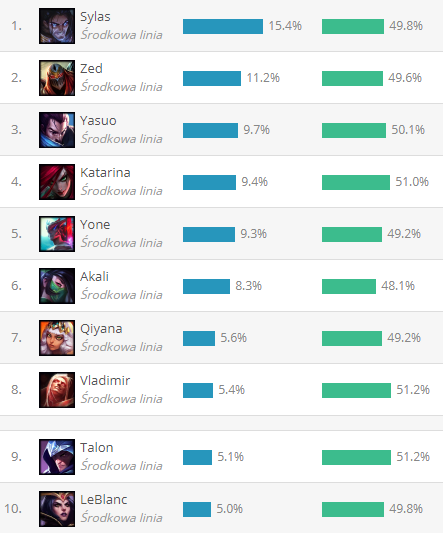 An entire lane is being dominated by one single playstyle:

Throwing yourself at the enemy backline and deleting carries.

There aren’t any ranged mages, control characters, or even shooters like Corki, Lucian, or Tristana in the top ten.

Commentators suggest that a good answer to this is some tank or bruiser quickly cleaning the line to prevent them from going down the line to other lanes, with mid slowly turning into a second top.

It is worth noting that none of these mages exceeded 5% of popularity, and the closest to the threshold is Viktor picked in 5% of games and Ahri picked in 4.8% of games. Will Riot do something about it? This is not known at the moment and none of the LoL creators has addressed the topic.