In League of Legends, for several years now, Riot Games has been creating characters and skins with new and interesting animations that please the eyes of players. This time, however, the new heroine has very basic effects, which made the community happy.

It is mainly about her return to base. Vex doesn’t do any acrobatics, doesn’t dance, doesn’t disappear, just sits down and waits. Why did this animation generate so much attention?

At the very beginning of LoL, the characters did not have advanced animations, only the simplest ones. All of this is due to high costs and limited technology. Now, however, each new character and skin effectively returns to the base, except… Vex. She just sits down and waits for the teleport.

While it is nothing interesting, it is a perfect match for a character that you want nothing to do and make older players nostalgic. At least that’s what the nearly 3,000-vote-backed author of the Reddit post says. 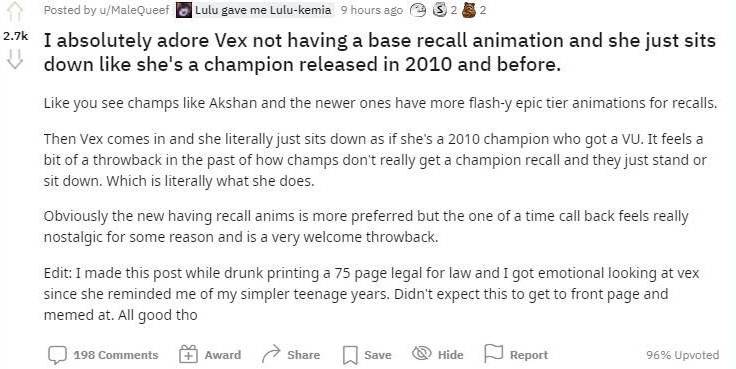 Vex is currently being tested on PBE servers and should all go as expected by Riot, she should appear in the game on September 22 in Update 11.19.