Rioter has created his own tier list and maybe it wouldn’t be surprising if it wasn’t for a detail.

Riot Games employees sometimes like to troll players, especially on their social media accounts, where they tend to be relaxed and detached about various topics. Often this type of attitude is criticized by the community, which, however, would like to get specific information from developers, and not just laugh.

This time, one of the employees, at the request of the players, decided to create his own tier list of all characters in League. As it turned out, not everyone noticed that it was a troll. People genuinely started complaining that Riot completely didn’t know what balance meant, that he was judging characters without any logic.

READ MORE
What does the new figurine from League of Legends look like? This time it’s K/DA Ahri

Riot August was widely talked about a few days ago when he stated that he didn’t like his work and considered Viego the worst champion he had ever designed. He then created a special Tier List of all his characters, and the Ruined King took the last place on it. 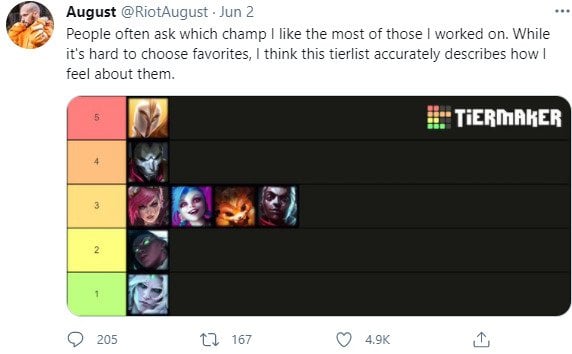 However, this was not enough for the players, and asked him for a similar list for all other champions. So it happened and August posted it on Twitter today, what does it look like? 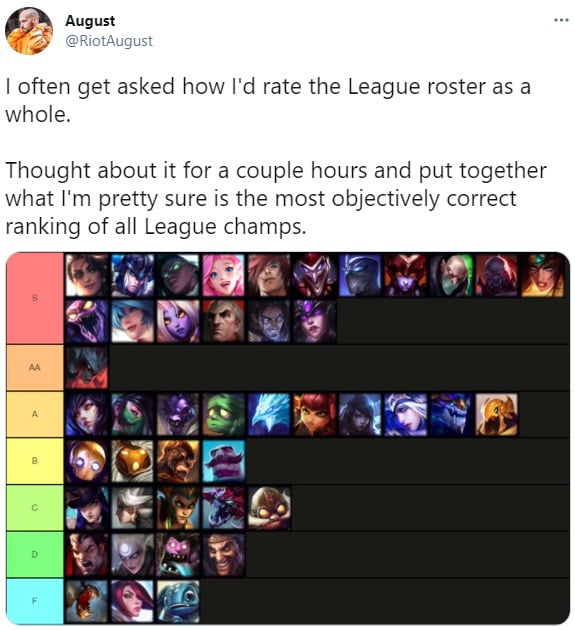 Although it looks normal at first glance and you can actually mistake it for a normal tier list, like one of the Twitter users, a lot of people quickly understood what was going on. By this point, people had gotten frustrated that it didn’t make any sense, and it’s no wonder Riot is balancing LoL so strangely when it portrays something like this.

Namely, as we can see, the name of each hero that is in a given category begins with a tier letter. Accordingly, there are Samira, Senna, Sejuani, Seraphine, and so on in S. The same applies to the letters A, B, C, D, F, and if that was not enough, there was even a special table for Aatrox himself – AA.

Many commenting admitted that they only started to suspect something with Skarner because no one ever places him in the highest possible tier.

It seems that Rioter’s joke turned out to be quite good for him – not only that his troll fooled a whole lot of players, but also those who understood him praised him positively.