How long does it take to design a champion in the game? What is done at the beginning and at the end of the whole process?

Many players wonder what the process of designing heroes in LoL looks like. In the last year, a lot of characters hit the game and there was a period when a new champion appeared practically every month.

The community is curious to see what it all looks like from the inside, how long does the whole process take – a month, two, or maybe half a year? What is done in the beginning when skins are designed and when the hero’s voice lines are recorded? You can find it out from the list below.

READ MORE
It’s not possible? Tell this to that LoL player who controls skills with his voice, stealing dragons

A graphic has appeared on the web that describes in a detailed but understandable way how the character creation process works. The picture shows the creation of a typical champion – it is possible that there are heroes that require more time or those that are designed a bit faster.

It can be seen that the overall process takes about 3-4 months and is divided into 3 steps. The longest of them – the base one, lasts over a month.

The stages consist of many smaller parts, among which you can find, among others optimizations, speech recording, bug fixes, design refinement, and so on. 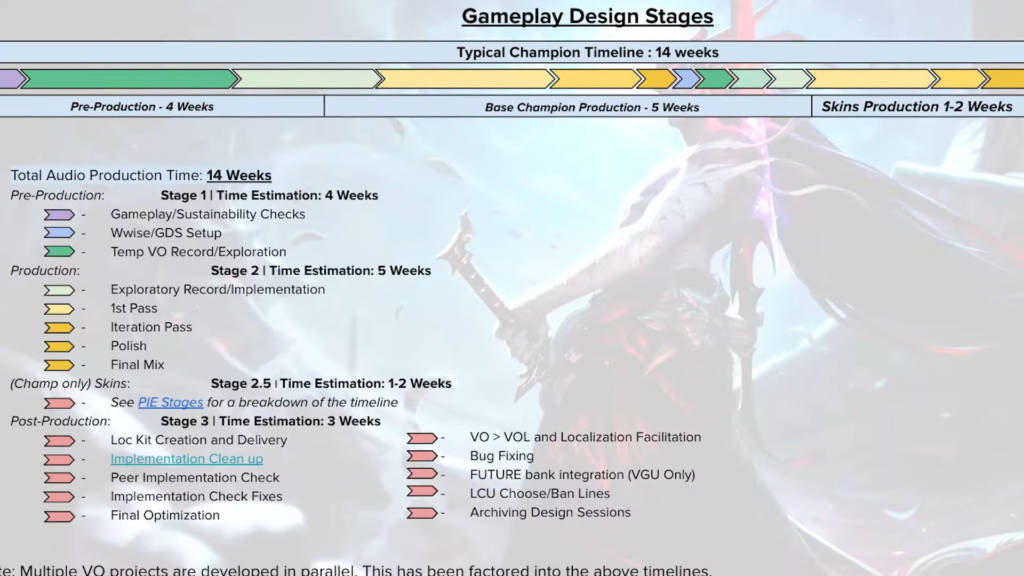 It is known from many Rioters’ statements in the past that creating champions can be incredibly surprising. There were times when the character was completely changed in the final stages of creation.

Probably some people know the story of Xayah, who was originally supposed to be a vampire. Her final skillset was set a few weeks before release:

The fun fact is that her current W was implemented just 3 weeks before the release.

Certainly, this type of curiosity is very interesting, thanks to which the community welcomes the fact that developers share such information and details.