LoL players may think that some of the changes are even cosmetic and have little impact on the characters. This case perfectly confirms that it is not quite so. In January 2021, Riot nerfed one of the heroes by taking exactly 2 points of base damage from him.

Today we know that it completely threw this hero out of the meta. Its popularity has dropped drastically, and so is the number of games won. And all thanks to a hotfix and 2 AD.

READ MORE
“At the roundabout, turn back” – one of the funniest and clever escapes in LoL

2 AD and the decline in popularity

At the beginning of January, Graves was doing really well. He had all the statistics that were close to what the hero achieved in the previous years. In fact, there was an increase in popularity.

In patch 11.1, which took place on January 6, Riot stated that Graves needed a quick fix of one of the stats. Theoretically, it wasn’t a big deal. They changed his basic AD from 68 to 66.

You might think it’s no big deal. One of many similar changes. The problem is that Graves relies heavily on basic attacks. We didn’t have to wait long for the effects.

You can clearly see the last jump and a very drastic decline, similar to what happened in 2018 and 2019. Unlike those years, however, the winrate has already been at this lower level. 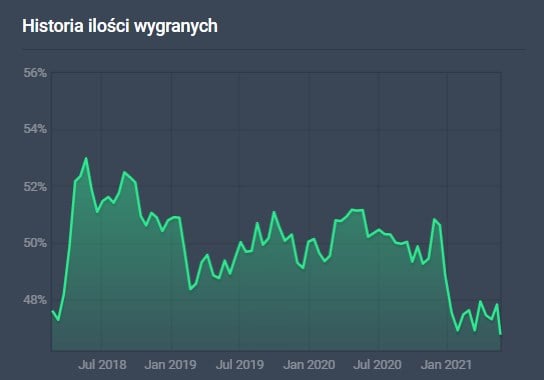 Riot surprised us with their latest decision. In the 11.14 update, this hotfix will be taken back.

So, in fact, Riot goes back to what Graves had at the beginning of this year. Could this be viewed as an admission of failure? It’s hard to say, because hardly anyone noticed it at all. The hero received the last changes in patch 11.11 and it can be assumed that this change after 2 months has something to do with it.

As the statistics show, this change did not have a major impact on the popularity of the hero. Now he can return to his former glory. Graves in general has a very turbulent history, which is perfectly illustrated by its popularity chart. His mains are incredibly happy once and then curse Riot.