There has been a lot of buzz in the League of Legends community about one character who has clearly grown in popularity thanks to buffs.

The situation in LoL can change dramatically due to frequent buffs and nerfs. It’s good since meta changes keep the game fresh. The studio does not even have to try too hard to attract players.

Currently, there is a lot of talk about the Korean build, which pushed one of the characters to TOP 1 in terms of pick rate. This hero received buffs back in Update 11.6 and only now has he gained a lot of popularity.

The pick rate growth trend is evident in all charts. Evidently, a lot has changed since patch 11.5 where Sylas was in 9th place. At the moment, he is the most popular mid-lane champion in Korea. 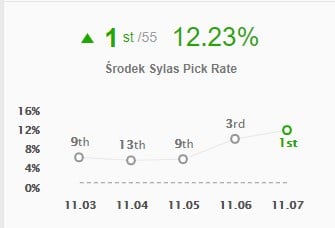 What has changed? It is specifically about the 11.6 update and changes:

As a result, the hero began to gain popularity very quickly. The players added a “mythical” Korean build, something that always makes the community excited. And it turned out to be a strong mix that is worth trying out for yourself. How exactly is it put together?

It is all based on three items:

This is where the real fun and massive damage begin. What to get next?

So you final target items are:

We already know the exact plans for patch 11.8, and despite the high and growing popularity of Sylas, his nerfs are out of the question. So you can expect that this build will easily apply at least for the next cycle.