What can you learn from the latest graphics featuring the next TFT Pass?

TFT is a completely separate game, which, however, is based on characters and skins found in League of Legends. There has also been a situation where the new content of Teamfight Tactics has revealed what soon went to LoL. Can the same be true this time?

TFT Pass and the Upcoming Event

There is some valuable information in the graphics that are circulating around the web, and you can take a look at it below. 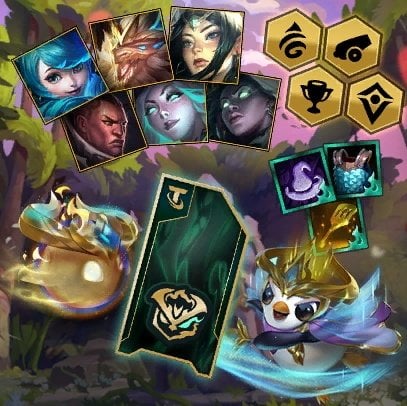 The frames around the class icon and item icons suggest that Ruin will be able to take over individual gameplay elements, while the revealed characters and skins that can be seen in the upper left corner are Gwen, Dragon Guardian Galio, the upcoming Sentinel Irelia, Lucian and Senna.

Between the two of the last-mentioned heroes, you can see a mysterious icon that players have been wondering about. Some of them pointed to a leak of the Ruined Ahri concept, which has just been made available on the web (A new skin leak for Ahri. This is probably the “ruined” version of it). Others spoke about Miss Fortune, whose artwork also found its way onto the Internet.