One of the players decided to check which roles will be drawn most often in ranked games.

There is a lot to say about autofill, that is, choosing any role before starting the game. Some people genuinely hate being auto-filled because they often end up in positions they don’t like or can’t play. There are also those who do not care, and regardless of where the game assigns them – they will always give their best.

Many players wonder which positions in League of Legends come across most when it comes to a random role. One of them decided to check it on their own skin, so they conscientiously noted the results from over 120 rankings. What are the results?

A player with the nickname Jack-Jewell decided to conduct the following experiment – he played ranking games at certain times (Solo/Duo queue) on the EUW server at the Silver level. He checked what role the autofill would assign him to, and he dutifully noted the results on a sheet. After playing about 123 games, he shared his observations and gathered information.

I did this because a few months ago I remembered a guy saying that people don’t want to play support and that’s why Fill always puts you in support and I wanted to see if he was correct. He wasn’t, people apparently hate playing the jungle (despite being a Jax Jungle main myself.)

The entire experiment lasted about 2-3 months. The player admitted that collecting information was sometimes painful – many times he played in a position he had no idea about and such games did not give him much joy. 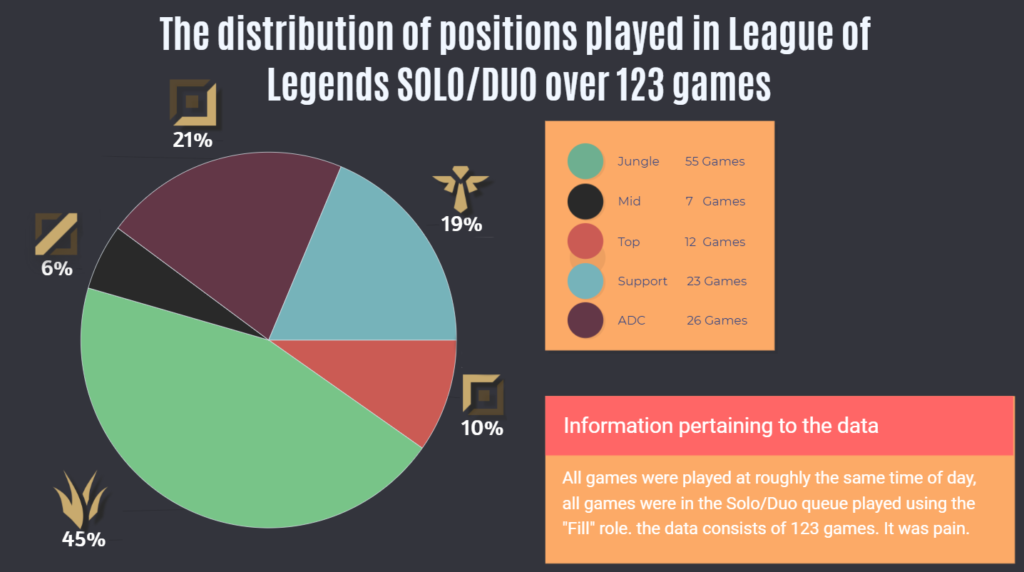 ALSO – How did the legendary Heimerdinger player with 14 million points got from Silver to Platinum by doing nothing?

As you can see, the results are as follows:

The chart shows that autofill drops you into the jungle in almost 50% of the games. The ADCs and support roles are quite similar – both around 20% of matches. Mid collected the smallest amount of percent, which is probably not particularly surprising to anyone.