A mysterious line of code in a file with game modes for LoL.

In League of Legends, in addition to the standard ranked queue, players can also choose between normal, ARAMs, and additional rotating game modes.

These, however, are not seen very often and are usually only available during events. It turns out, however, that we may soon see something completely new.

Since the beginning of League of Legends, players have been able to enjoy a whole lot of new entertaining gameplay modes that will appear from time to time. Among others, as an example, it is worth mentioning the most popular ARURFA, URF, One for All, Poro King, Nexus Blitz, or the Twisted Treeline – Hexakill taking place on the already removed map.

ALSO – This is the weirdest start to EUNE LoL you’ll ever see. Characters are invisible

Many players, however, complain that nothing new appears and that the same modes are repeated all the time. Perhaps it will change soon because a new line has appeared in the file listing all additional modes: 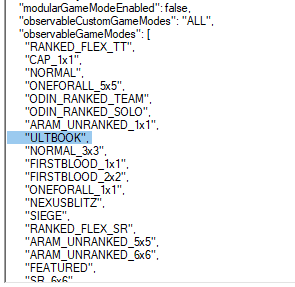 At the moment, it is not known what it means and there is no official information about it. Perhaps it will be added together with some new event, but this is not confirmed.